What are you watching..

A place to hang out, get to know other Muggles and discuss everything under the sun.
Post Reply
86 posts 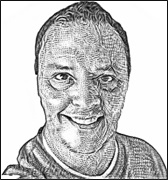 I didn't know what this was, Joe, until I read the review in the WSJ! To me, Bosch is a brand of appliances and tools; but what do I know, my significant other is an appliance repair guy!
Good luck, fellow Muggles! I'm happy to give nudges, but only if you're still stuck on Sunday. Just send me a PM and tell me what you've tried so far.
Top

I enjoyed the new season of Bosch, but have to say the actress who plays Maddie really got on my nerves. In all the previous seasons, I enjoyed that character, but this season I could barely watch her. I don’t know if it was her acting or the writing, but I just found her completely taxing.
Top

whimsy wrote: ↑Thu Jul 02, 2020 4:09 pm
The Detectorists -- a couple of guys using metal detectors to look for treasure (but no, not a documentary.) That might sound like watching paint dry and to some extent it is -- very slow and gentle. Maybe Mister Rogers for adults. The first 10 minutes I thought the characters must be losers -- they kind of reminded me of carnies. But that only served to chasten me that things can be more than what they seem, or my first assumptions. Ended up just loving them all, and looking to promote them.

Whimsey - totally agree, The Detectorists is the best! I generally tell people to watch at least two episodes before they decide if they like it or not. And with some people I warn them that it might seem like the show is making fun of them but that it is not.

I'm also a fan of this show! Love the search for treasure and the interpersonal relationships! And Diana Rigg! Was able to borrow the DVDs from my local library!
Top

Recommend Italian police drama Thou Shalt Not Kill, available online at PBS. I recorded 10 episodes it when it aired here on PBS NC, have watched four episodes so far (each story is 2 eps long). It takes place in Turin, lots of interpersonal drama for detective Valeria Ferro as well as crime solving. It's shown in Italian with subtitles.

Also Murdoch Mysteries, now airing on US cable channels Ion plus and Ovation, but also on Acorn. Fourteen seasons following detective William Murdoch of the Toronto Constabulary beginning in 1895. Murdoch is a forensic technician ahead of his time, uses science and tech to solve crimes. Sometimes it's Steampunk, occasionally it's science fiction, but it's always interesting. And even more fun, lots of famous people show up in guest roles: Nicola Tesla, Thomas Edison, Henry Ford, Alexander Graham Bell, Emma Goldman, Helen Keller, Arthur Conan Doyle, Mark Twain, Lucy Maud Montgomery, Jack London, Teddy Roosevelt, et al. Not sure it's documented that any of them actually visited Toronto, but I'll go with it! Season 15 premiers in Canada in September!
Top
Post Reply
86 posts